Note: Due to time constraint, I have to pause AIND at the planning section. If I have time in the future, I may restore my study in the following:
Peter Norvig: AI is all about figuring out what to do when you don’t know what to do. Regular programming is writing instructions to make the computer do what you want when you do know what to do. In AI, it’s for when you don’t know. search is one of key areas where we can figure out what to do by planning a sequence of steps, even when we have no idea what the first step should be until we solve the search problem.
Rubik’s Cube: God’s Number is 26 in the Quarter-Turn Metric.

Also called best estimated total path cost first
only expanse the minimum value. f = g+h
g(path) = path cost so far
h(path) = h(s) = estimated distance to goal = straigh line distance
g is to keep the path short, h is to keep us focus on the goal.
A search finds the lowest cost path if *h(s) < true cost. h is optimistic.
A problem solver that uses a heuristic function given to it really is not intelligent at all.
crossing out parts of the rules is called generating a relaxed problem.
searching is one of the most fundamental methods of solving problems in AI.
Peter: To me, AI is programming a computer to do the right thing when you don’t know for sure the right thing is.
The book was successful because of a fortuitous accident of timing. we happened to come along just as AI was making this transition from Boolean logic to probability and from handcarfted knowledge to machine learning.

do the stupid thing first, and only add intelligence when necessary.
global optimum: an element of randomness is what you need
taboo search: it is taboo if somewhere you have already been.
stage algorithm: keep a list of all local maximum and try to get the general shape of the problem，try to predict where a new maximum might be, given the areas I haven’t explored yet.
local beam search/ stochastic beam search: keep track of k particles. At each time frame, we randomly generate neighbors of these particles and keep the best ones for the next iteration. There are messages sharing between these particles.
genetic algorithm is a fancy version of beam search that happens to make a nice analogy to biology. some people call it the 2nd best solution to any problem.
We’ll see these ideas repeatedly in aI, in techniques like particle filters, pattern recognition with hidden Markov models, and Monte Carlo Markov chains. Sometimes let them go and embrace randomness is the key to the solution.
randomized optimization

https://github.com/udacity/AIND-Simulated_Annealing
Follow the instructions to implement Simulated Annealing from AIMA

AI started in the 50s~70s with the idea that what we needed was better language and systems for writing down logical statements. Once we have done enough of them, we should be able to do anything of them. Some progress but 2 major issues:
Today, logic is still useful in many domains where we can eliminate much of the uncertainty of real world and solve significant problems. Like FedEx planning all the deliveries of its packages.
Expert system.
future of planning algorithms:
value iteration is a key concept for Markov decision processing.

Blindfold Hiker Test: We can’t just plan ahead and come up with a whole plan. We need feedback from environment. We have to interweave planning and execution:
When we start, we only have the high level parts of the plan, then during execution that we schedule the rest of low level parts of the plan.
sensorless planning in a deterministic world.
observation updates our believe state. Observation alone can’t create new states, but can partition them into pieces.

In a sense, all areas of engineering can be seen as designing artifacts that interact with the world; AI operates at the most interesting end of the spectrum, where the artifacts have signficant computational resources and the task environment requires nontrivial decision making.
As a general rule, it is better to design performance measures according to what one actually wants in the environment, rather than according to how one thinks the agent should behave.
which is better— a reckless life of highs and lows, or a safe but humdrum existence?
rational agent: given percept sequence and built-in knowledge it has, select an action that is expected to maximize its performance measure.
Rationality maximizes expected performance, while perfection maximizes actual performance. The latter is impossible unless you have a crystall ball or time machine.
autonomous: an agent not only relies on its prior knowledeg of its designer; it can use its own percepts to learn and compensate for partial or incorrect prior knowledge.
Task environment: performance, environment, actuatoors, sensors.
“percept,action” table-driven approach is doomed to failture due to super large number of entries, say,

(number of atoms in the observable universe).
4 kinds of agent programs:
Any rational agent must behave as if it possesses a utility function whose expected value it tries to maximize.
learning agent: 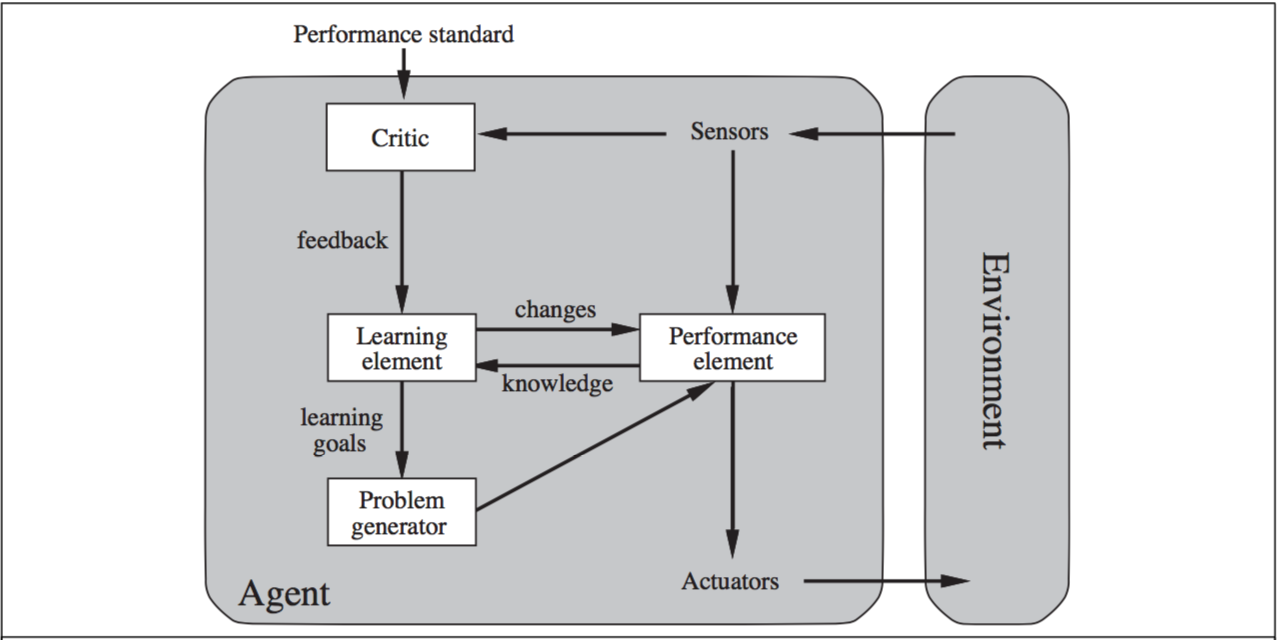 fully observable, deterministic, static environments with single agents
factored representation.
a fluent is a condition that can change over time. In logical approaches to reasoning about actions, fluents can be represented in first-order logic by predicates having an argument that depends on time.
To describe the planning problem concisely, we use PDDL (Planning Domain Definition Language):
​
Posted by Yuchao's blog at 11:25 PM No comments: