This topic is more difficult than I previously expected. I have spend a whole week digest every piece of mathematics. I use my arms everyday but never thought a robotic arm hides so many transformation matrice!

Kinematics is a branch of classical mechanics that studies how things move without considering the forces required to produce the motion. Several important concepts:
To fully describe the configuration of a rigid body in 3-dimentional free space, you will need to specific 6 coordinates.
Joint types: 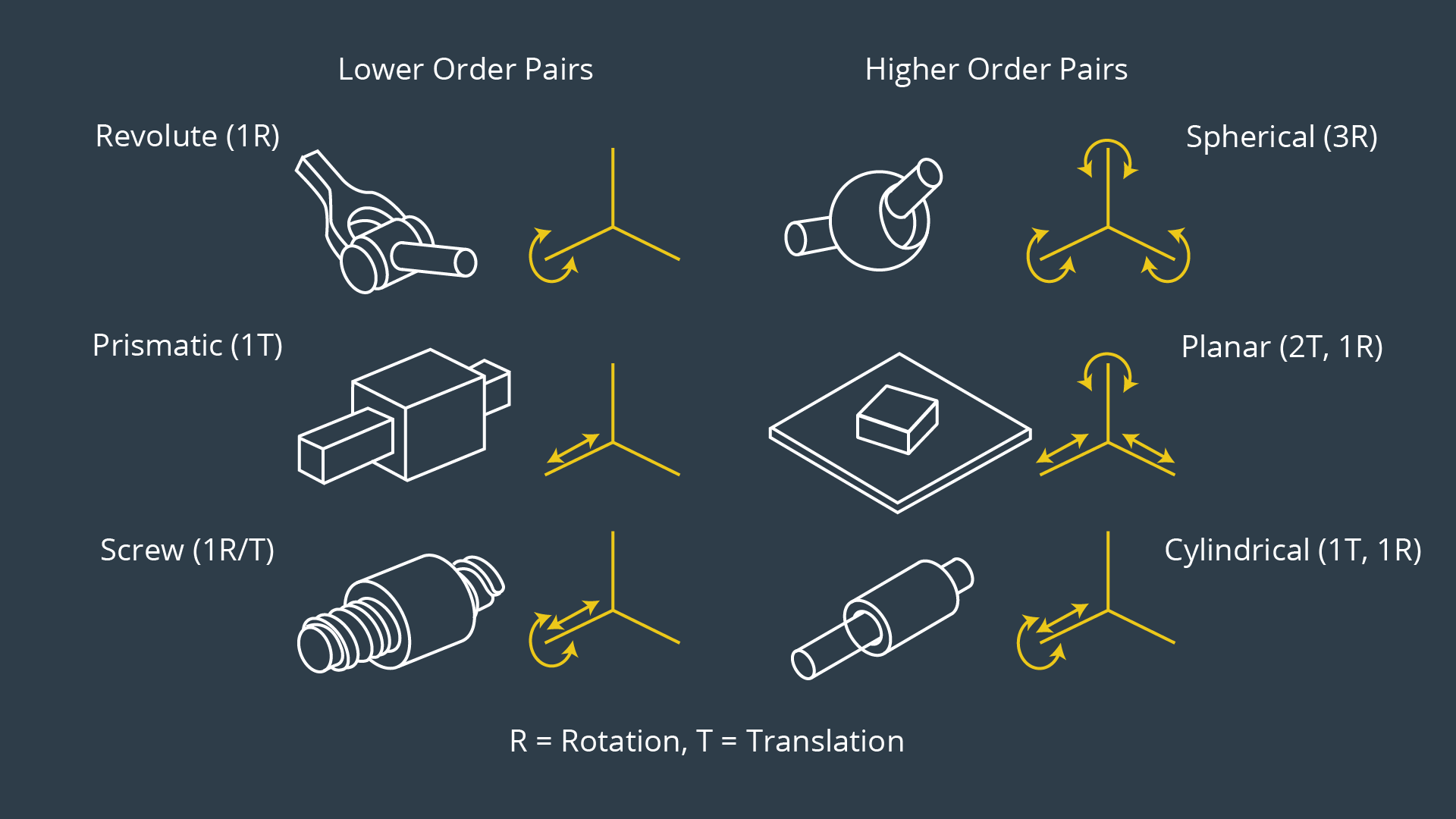 Rovolute Joint: It rotate along a specific axis.
Prismatic joint: provides a linear sliding movement between 2 bodies, and is often called a slider, as in the slider-crank linkage.
End effector: the device at the end of a robotic arm, designed to interact with the environment.
Joints can be grouped into lower order pairs having one DoF and higher order pairs offering two or three DoF. For serial manipulators (a.k.a., robot arm or kinematic chain), the most common joint types are revolute and prismatic allowing one rotational and one translational DoF, respectively.
Two rigid bodies in free space connected by a one DoF revolute joint would only have a total of 6 +1 = 7 DoF. For modeling purposes, higher order pairs are always replaced by a collection of lower order pairs, e.g. the revolute and prismatic Joint, each with 1 DoF. For serial manipulators with only revolute and/or prismatic joints, the number of degrees of freedom is always equal to the number of joints.
A typical serial manipulator has 6 degree of freedom: the first 3 joints control the location of the wrist center, while the last 3 only control the orientation of the end effector. A sphereical wrist has 3 DoF.
With only revolute and prismatic joints, there are only 8 possible permutations of arm types. But only 4 types are commonly used in industry: Cartesian (PPP), Cylindrical (RPP), Anthropomorphic (RRR), Scara/Spherical(RRP).
workspace: the set of all points reachable by the end effector.

What this course is about?

Given a robotic arm, we can know the parameters of the orientation and relative distance of each joint,
Forward kinematic problem: assume we know the rotation angle and translation distance, how can we express end effector’s position, either in analytical formula or numerical values?
Inverse Kinematic problem: we alway know the target position, how can we derive the angle and translation distance for each joint?

Rotation matrix solves the problems that 2 frames have different orientations.
Given: point (ux,uy) in frame B, angle theta from frame A to B.
Ask: what’s (vx,vy) in frame A for the same point? frame A can be considered as the orginal frame or the world map.

Euler angles: a system to describe a sequence of rotations. The orientation of any rigid body with respect to some fixed reference frame can always be described by 3 elementary rotations in a given sequnece.
Several convection:
Rotations do not obey the commutative law of multiplication. The order matters.

2.8 from rotation matrix to Euler Angle

An inverse inferring to get

Note that translation only applies to different frame with the same orientation.

indicates the position of point P relative to Bo, the origin of frame B. The leading superscript is to denote that this vector is expressed in the B frame. In other words,

The goal then is to describe P relative to Ao,

Because both frames have the same relative orientation, describing P relative to Ao only requires simple vector addition:

simultaneously rotated and translated with respect to each other:

The marix representation is designed as:

To be more specific:

The 4x4 matrix called a homogeneous transform.
The inverse transform from B to A is:

Intrinsic rotation, post multiply. The interesting thing is you treat the point as a static point, only the reference frame is changed.

In general, each transform would require six independent parameters to describe frame i relative to i-1, three for position and three for orientation.
In 1955, Jacques Denavit and Richard Hartenberg proposed a systematic method of attaching reference frames to the links of a manipulator that simplified the homogeneous transforms. Their method only requires four parameters to describe the position and orientation of neighboring reference frames.
Several modifications have been made to the DH method. The four most common sources are listed below,
In this course, we will be using the convention described in John J Craig’s book.
The homogeneous transform from frame i-1 to frame i is constructed as a sequence of four basic transformations, two rotations and two translations as follows:

The parameter names and definitions are summarized as follows:
there is only one parameter that is variable (either θi or di), the link length and twist angle are constants.Thus, for the entire transform from base link to end effector,

, there are only n-variables.
An example of an actual SCARA robot (RRPR) is the KUKA KR10, which is suitable for pick and place operation.
Detailed explanation refers to section 13-16. 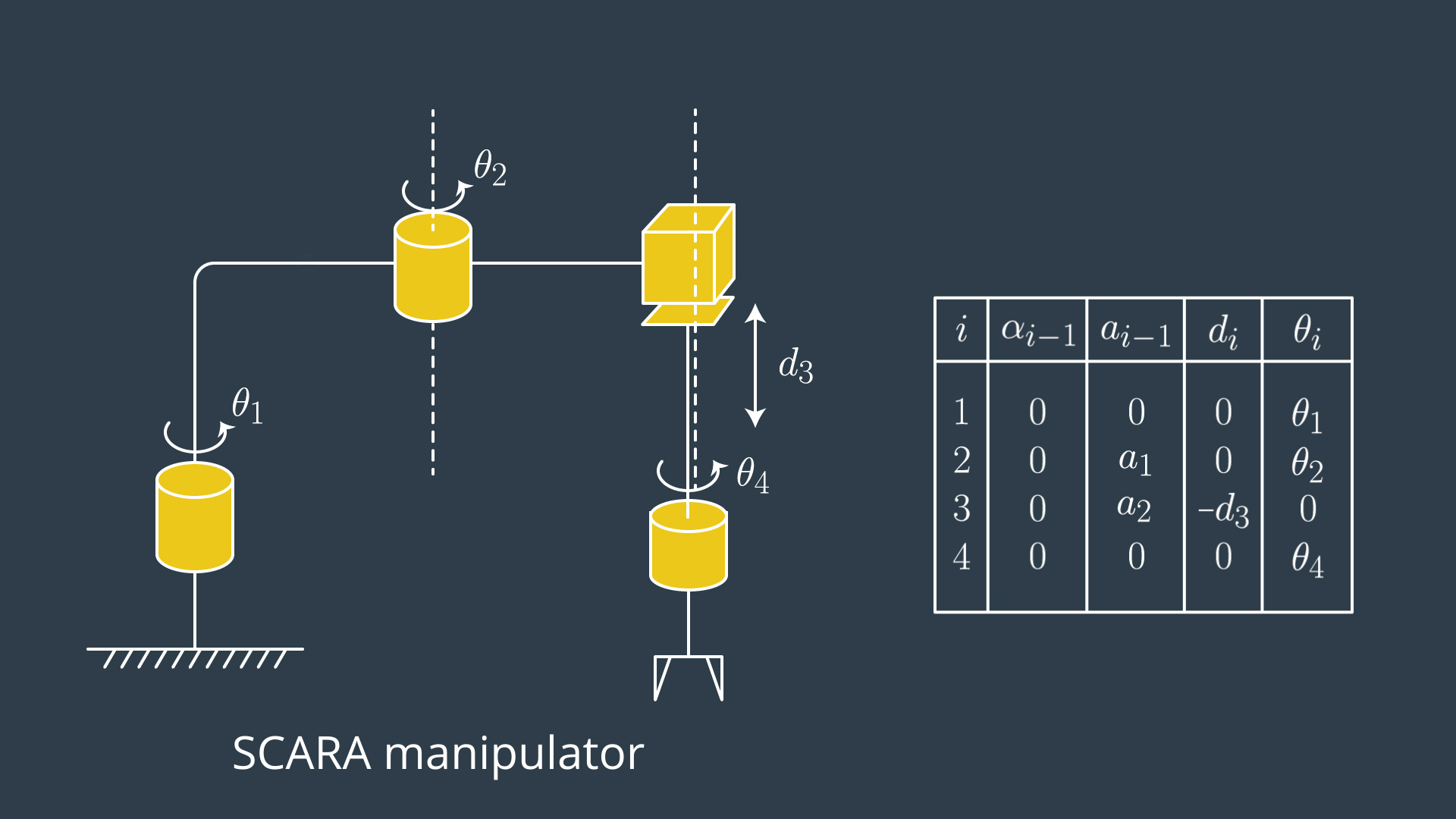 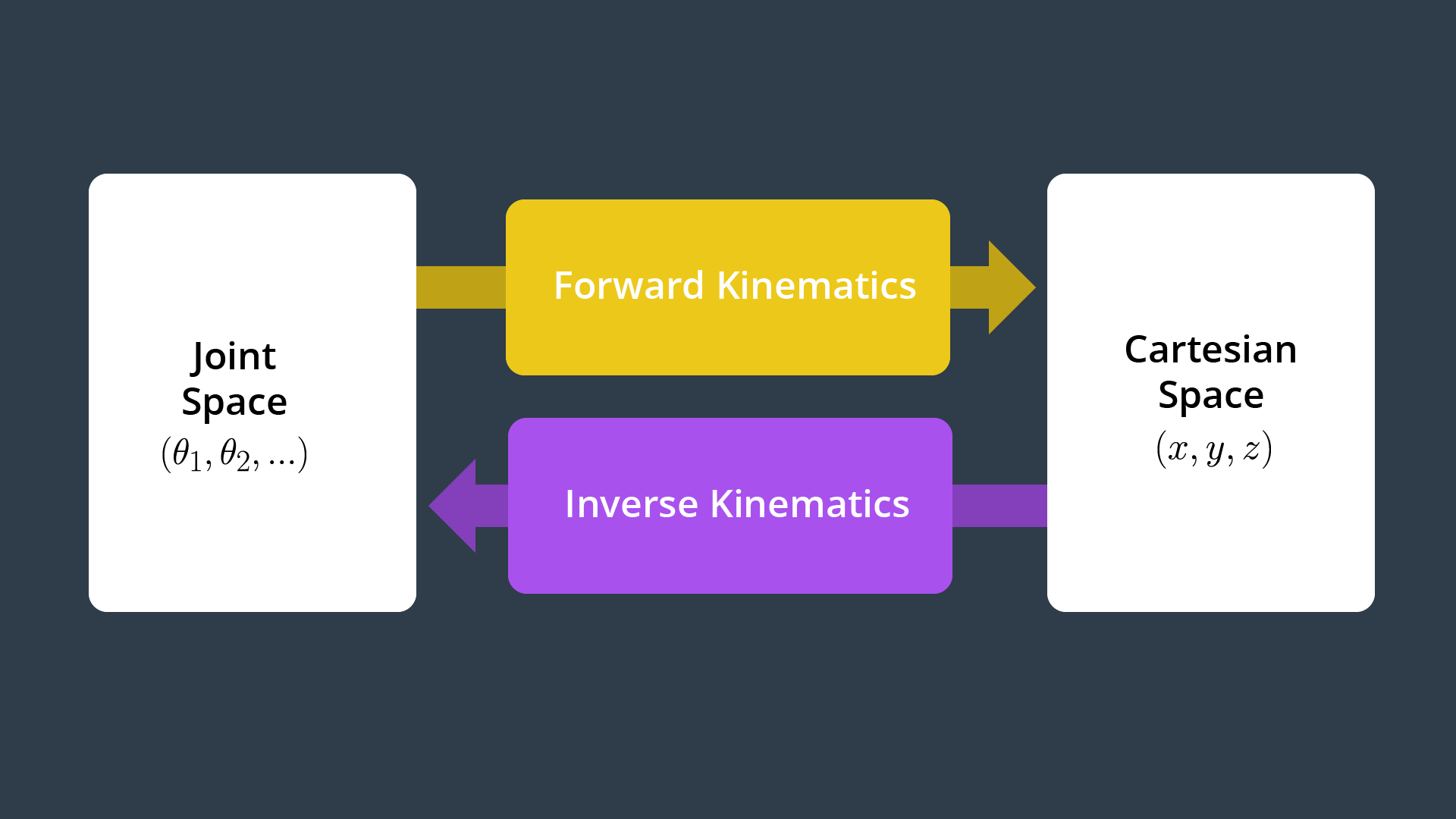 Two approaches to solve IK problem:
Fortunately, most industrial serial manipulators satisfy the conditions solvable by the 2nd approach. In particular, the last 3 joints are revolute joints which form a spherical wrist with a wrist center (WC). Such design kinematically decouples the position and orientation of the end effector. So the problem is divided into 2 basic steps.
1st, get the wrist center position in the base frame. The confusing thing here is that

is in the frame 6. We intentional manipulate the frame EE so these two align (same orientation) and

is the position of end effector and

can be directly calculated from the orientation of the end effector, i.e. euler angle (roll, pitch,yaw).
2nd, calculate the angles of first 3 joints by the Wrist Center using cosine laws 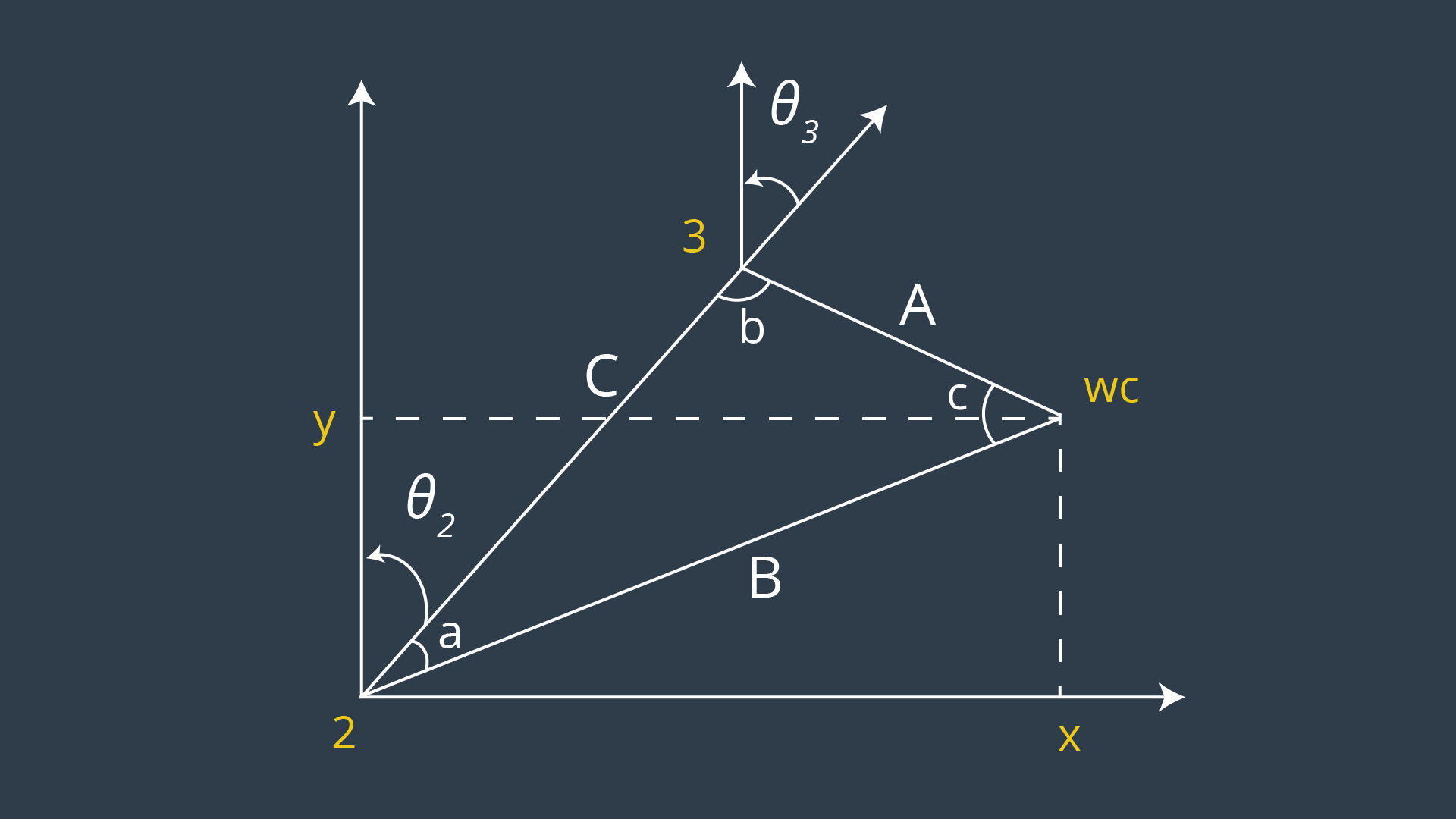 With these 3 angles, calculate the

, the remaining angles can be calculated by the matrix element.

tools:
While your python script only solves IK for a specific 6DOF (6 joints) robot arm (Kuka KR210), there are generalized libraries and plugins which can be used to solve IK for different types of robots. A couple of widely used solutions are:
Inverse Kinematics: given a list of end-effector poses, calculate joint angles.

set /kuka_arm/launch/inverse_kinematics.launch ‘s related flag to true.
Unified Robot Description Format or urdf, is an XML format used in ROS for representing a robot model. We can use a urdf file to define a robot model, its kinodynamic properties, visual elements and even model sensors for the robot. URDF can only describe a robot with rigid links connected by joints in a chain or tree-like structure. It cannot describe a robot with flexible links or parallel linkage.details: https://classroom.udacity.com/nanodegrees/nd209/parts/7b2fd2d7-e181-401e-977a-6158c77bf816/modules/8855de3f-2897-46c3-a805-628b5ecf045b/lessons/91d017b1-4493-4522-ad52-04a74a01094c/concepts/304b7bc0-6fe8-4614-bd09-4a545665adad
within kuka_arm/urdf/:
MoveIt! does not have an inbuilt motion planning algorithm. Instead it provides a convenient plugin interface to communicate with and use various motion planning libraries.Moveit! utilizes a special ROS Service to establish a request-response relationship with any given motion planner.
At various stages in the process of motion planning, Moveit! needs to convert the joint_state of the robot into the end-effector pose using Forward Kinematics, and vice-versa using Inverse Kinematics. 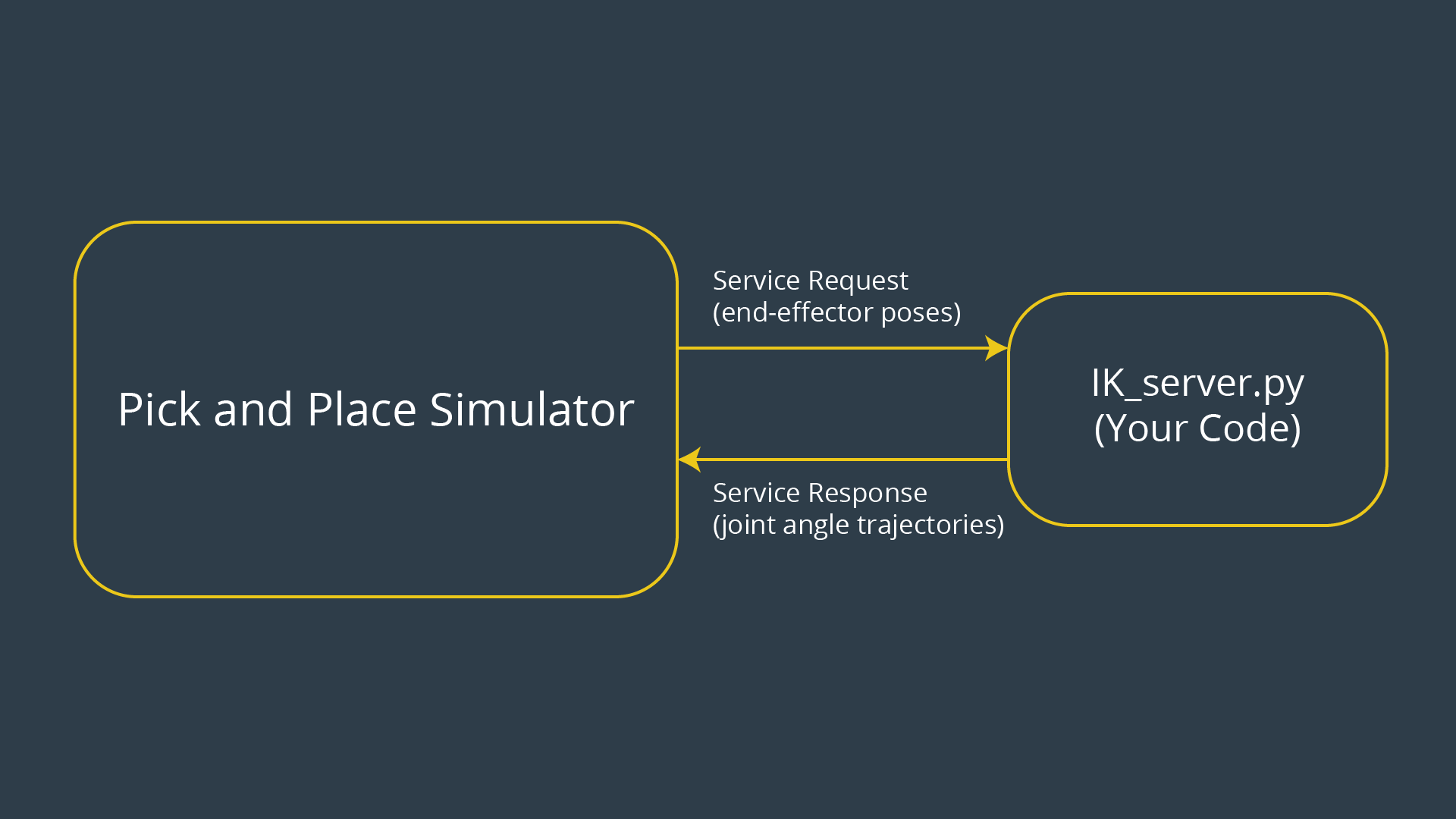 While your python script only solves IK for a specific 6DOF robot arm (Kuka KR210), there are generalized libraries and plugins which can be used to solve IK for different types of robots. A couple of widely used solutions are:
The important detail to remember is that our URDF model does not follow the DH convention; the frames from your DH parameter table will NOT always match the default orientation of the KUKA arm in RViz and/or gazebo.

A typical test case is
[[EE position],[EE orientation as quaternions]],[WC location],[joint angles] with size of 3,4,3,6. The first 2 vectors can used as input, and the last 2 vectors can be used for checking the IK results. 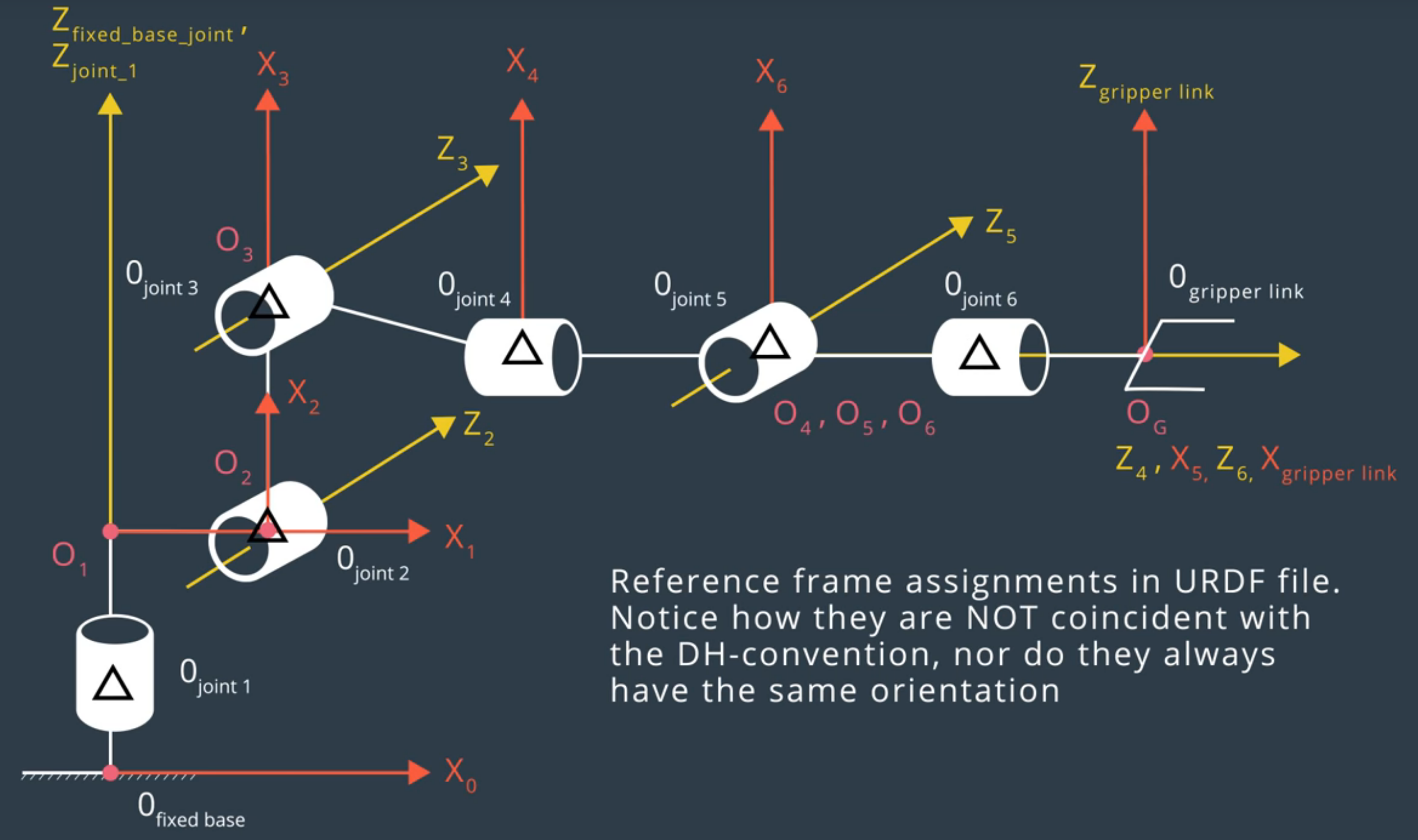 And the table is
kr210.urdf.xacro file shows the relative position between current joint and its parent joint. The choice of x-y-z axis for each frame follows the rules of minimizing the number of non-zero parameters.
For example, the d value of joint 1 can be chosen to be 0.33 or other arbitrary number. But it is better to choose x1 axis to be intersected with next joint, which can reduce the number of non-zero parameters. As a result, D is chosen to be 0.75 for joint 1.
details see: https://github.com/jychstar/NanoDegreeProject/tree/master/RoboND/p2_kinematic
To run the code
​
Posted by Yuchao's blog at 11:06 PM No comments: